A visit to Hampton Court Palace by riverboat from Richmond 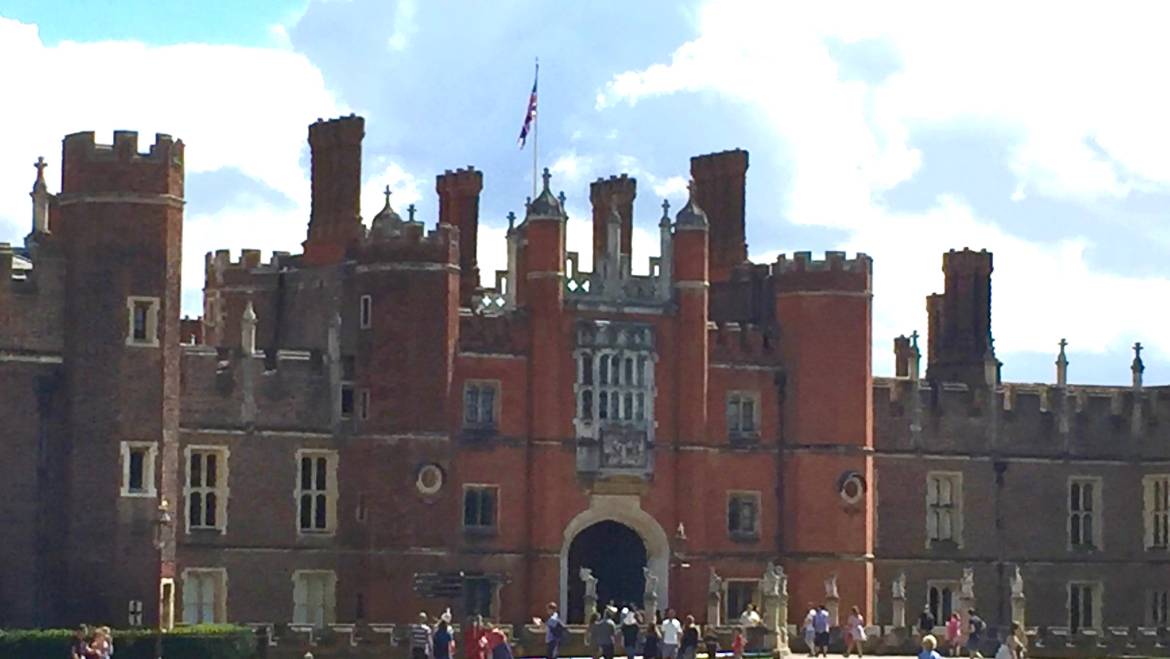 What is Hampton Court Palace?

Hampton Court Palace is a magnificent historic building on the banks of the Thames upstream from Westminster. It was a favourite haunt of Henry Vlll, away from central London and near Richmond Park, where he could go hunting. 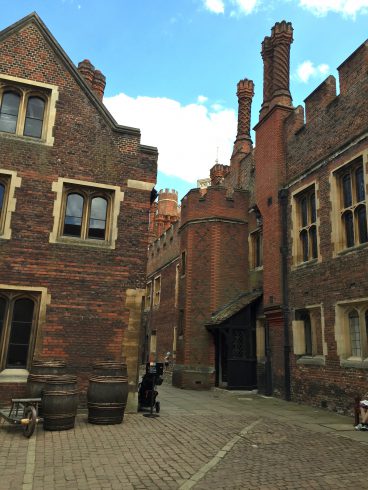 Getting to Hampton Court from Richmond

On a gloriously sunny day, we decided to travel by boat with Turks Launches from Richmond riverside to Hampton Court itself. The starting point (outside the White Cross pub) is walking distance from our home and we arrived in good time for the 11am sailing.

You can’t book online; all tickets are bought on board.

The boat can take 194 people. If it’s full, they will arrange another boat, which is what happened on our return. The return fare is around £10 and the journey takes about an hour and 45 minutes each way. 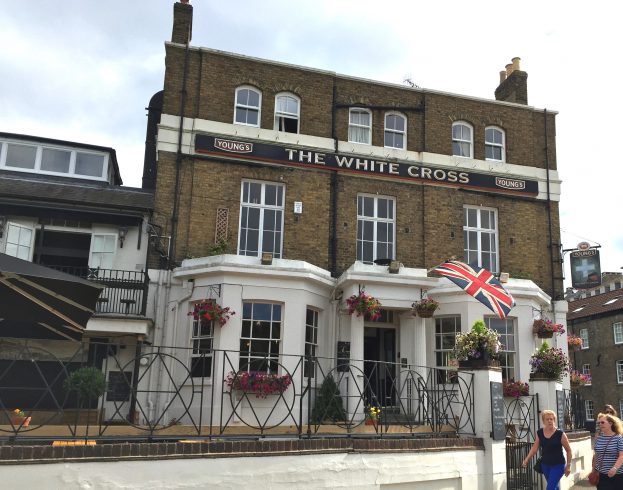 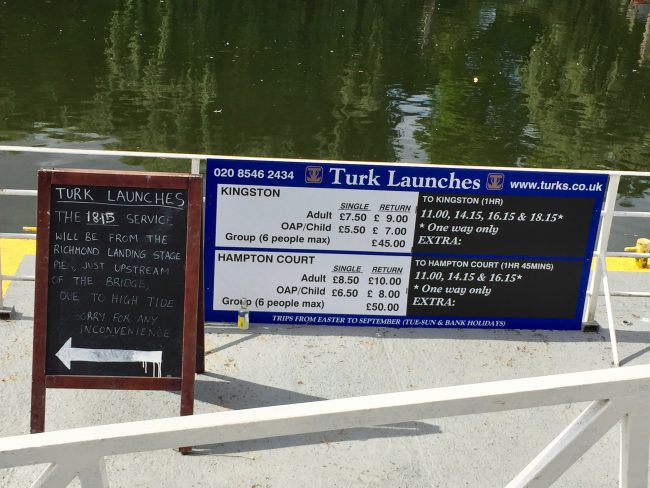 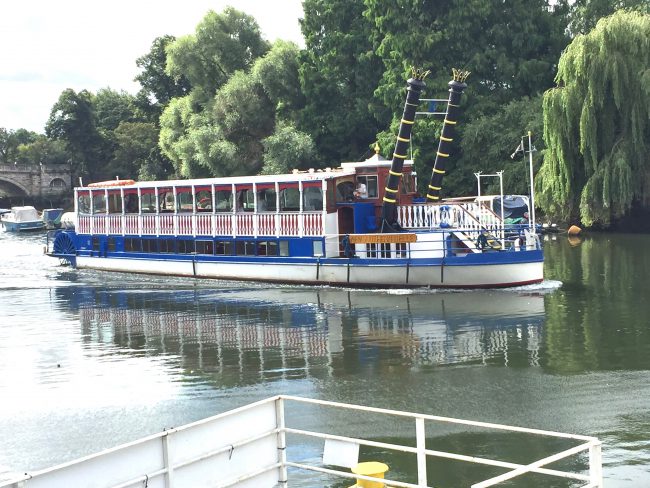 We sat upstairs. There is seating along both sides, with wide sliding windows, some of which were open, so good for photo opps. I’d only just sat down when I was aware of a smiling woman coming towards me.

As she spread her arms to gave me a bear hug, I remember thinking she looked like Cynthia from Texas.

A nano second later, I realised it was Cynthia from Texas. I’ve not been to Texas and it was her first trip to the UK in five years. We met in Germany earlier in the year. It was her birthday, so I bought her a drink, both to celebrate her special day and acknowledge the amazing coincidence. (Prices are reasonable and they use proper glasses, not those horrible plastic things.) 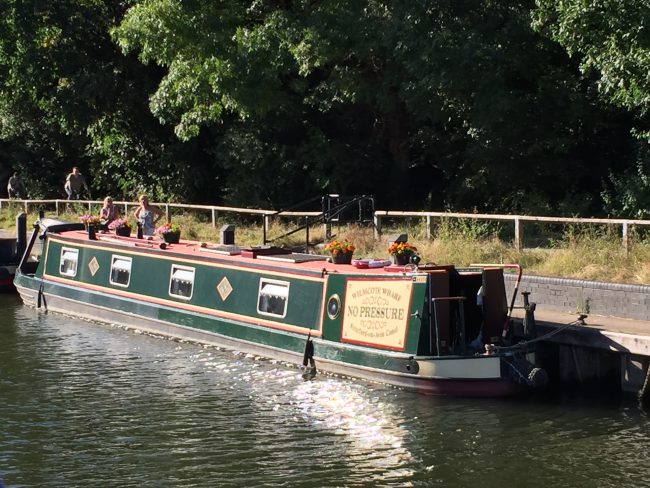 When we arrived at Teddington Lock, we had to go through the lock gates which is exciting. At Kingston, we had to change boat. It was easy enough and took about five minutes. 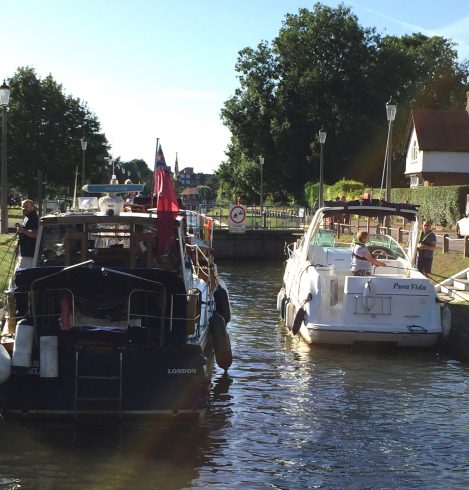 Lunch in the sun

The Palace is about a five minute stroll from the pier. Since it was now lunchtime, we decided to go to a pub I had found online earlier. It’s part of the small Brunning and Price chain. We’d had an excellent meal at their new Pheasant in Buckland a few weeks back, so thought we’d give this a try.

The Mute Swan is in a prime position right opposite the Palace and it was a fine summer Sunday, so we were lucky to get the last outside table.

P had his usual fish and chips and I enjoyed a feta quiche – both good and washed down with a cold beer. 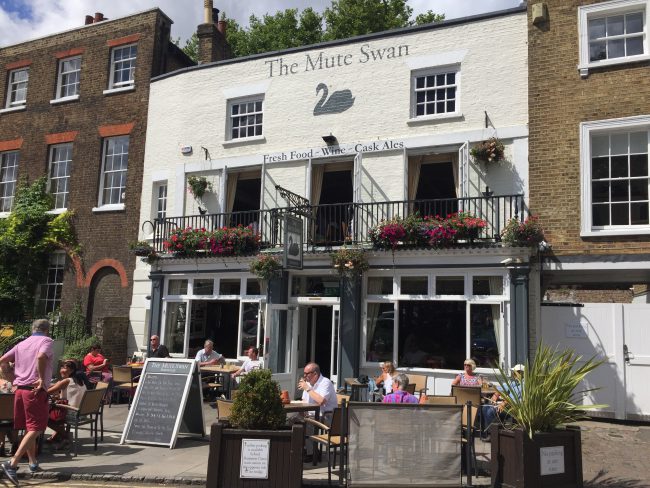 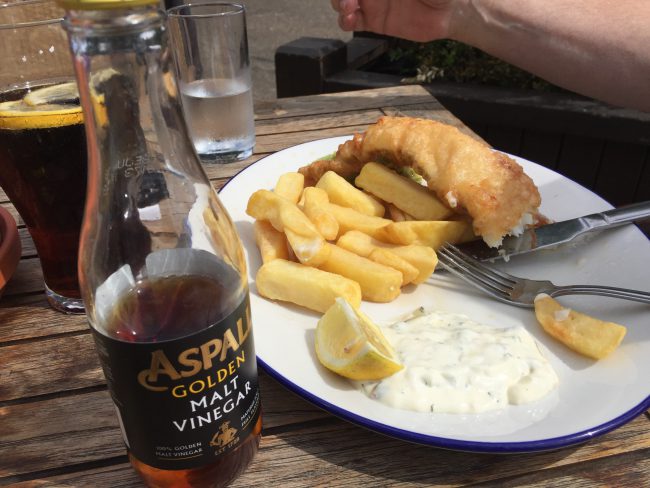 Who lived at Hampton Court Palace?

Originally started by Thomas Wolsey in 1515, the King’s favourite fell out with his benefactor and handed over the palace a few years later. Henry Vlll had it extended so it was large enough to hold his whole court, which amounted to around 1000 people. Later additions were built by among others, Christopher Wren. Hampton Court Palace celebrated its 500th anniversary in 2015. The palace now belongs to the Queen and is one of several royal palaces. 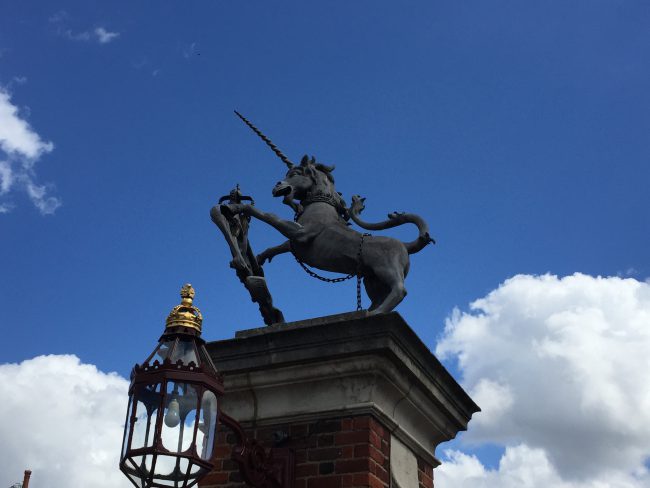 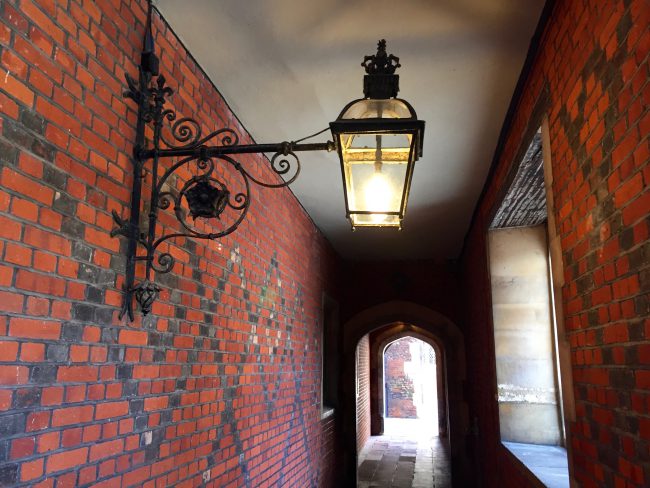 What to do when you are there

At the ticket office, you will be given a pamphlet with ‘Today’s Programme’ – this includes enactments, tours and details about audio guides, all included in the ticket price.

There is a lot to see at the Palace, so best decide what interests you and pace yourself. There are plenty of picnic spots if you decide to make a day of it.

It’s slightly cheaper to buy online and you skip the queues. However, this aspect was well organised and we hardly had to wait at all.

Men and women in period costume wander around and there are plenty of officials to ask questions of. I found everyone helpful from the officials at the entrance to the guides in the period rooms and the assistant in the shops. 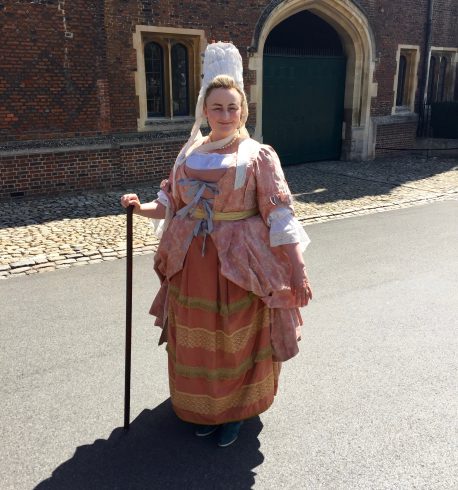 We saw fabulous tapestries, lovingly refurbished, and artworks from the Royal Collection. Staircases are spectacular with fretwork balustrades and sumptuous murals and ceilings. Grand feasts had intricately pressed linen to decorate the tables. The kitchens were enormous and the pie maker must have been kept very busy. 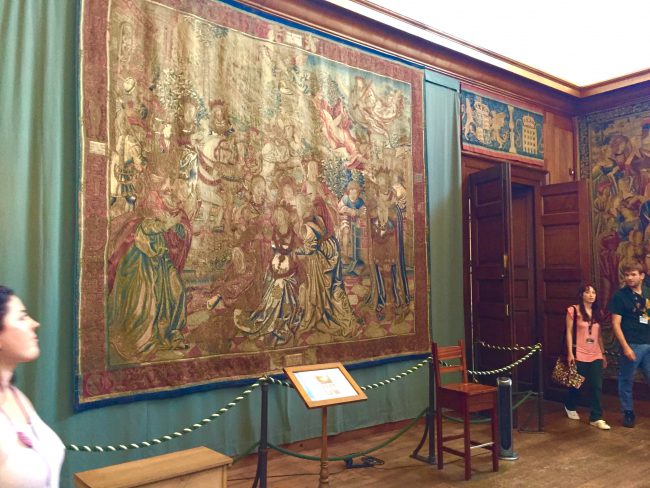 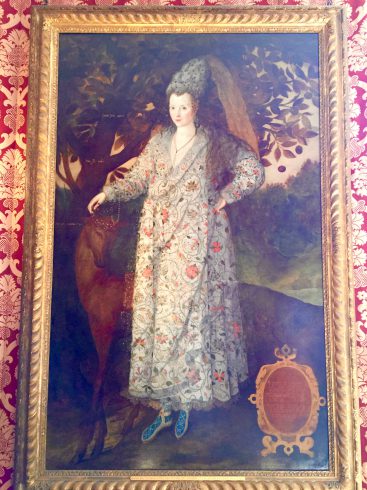 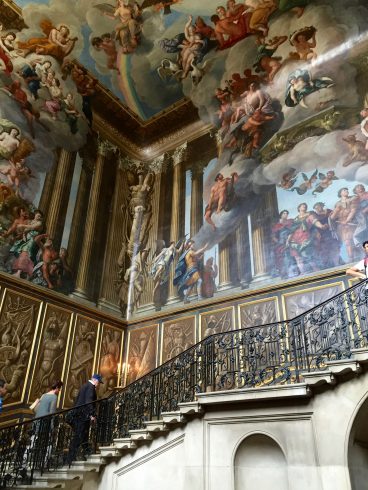 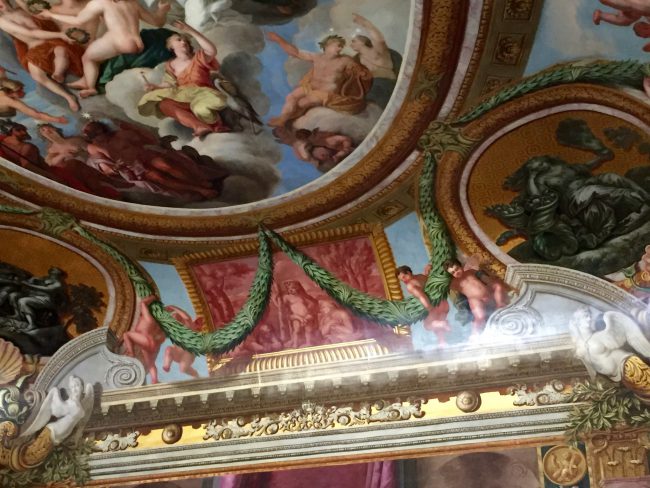 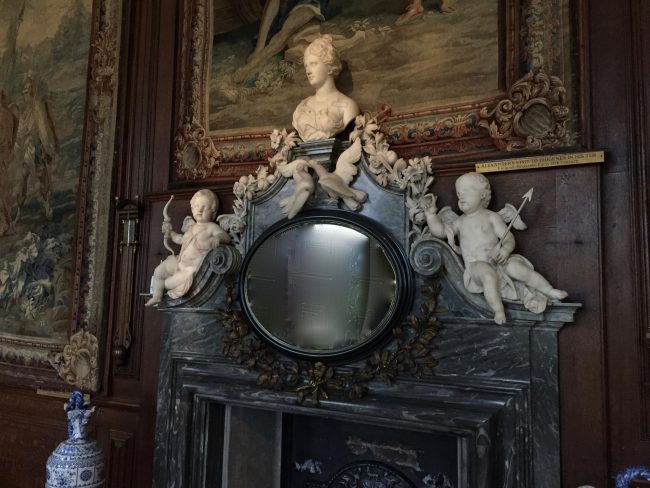 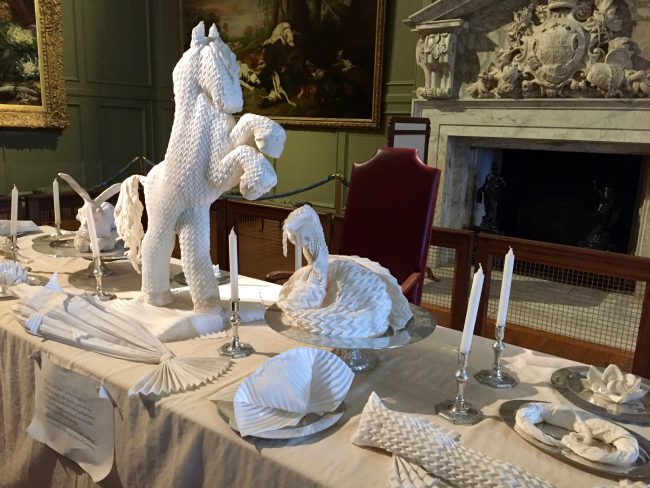 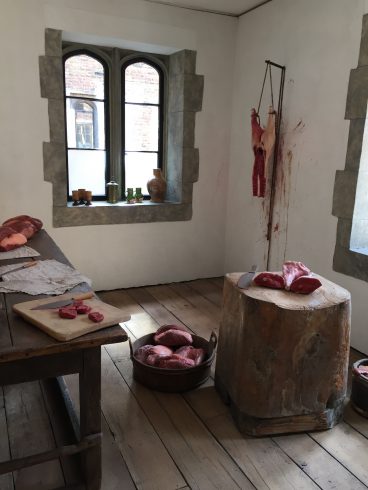 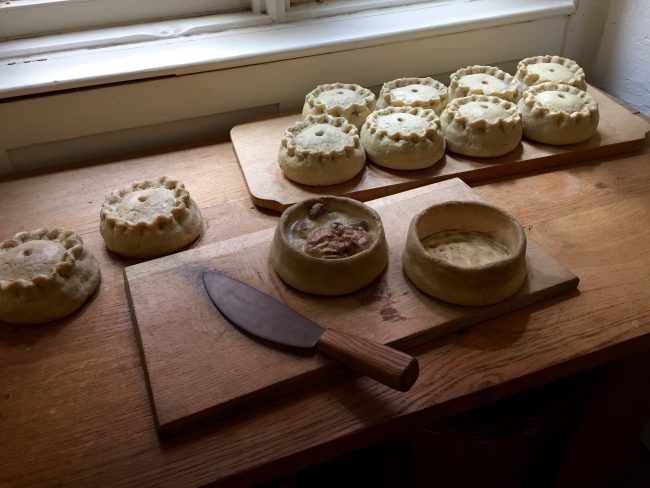 The carpenters’ court gave glimpses of the tudor chimneys. 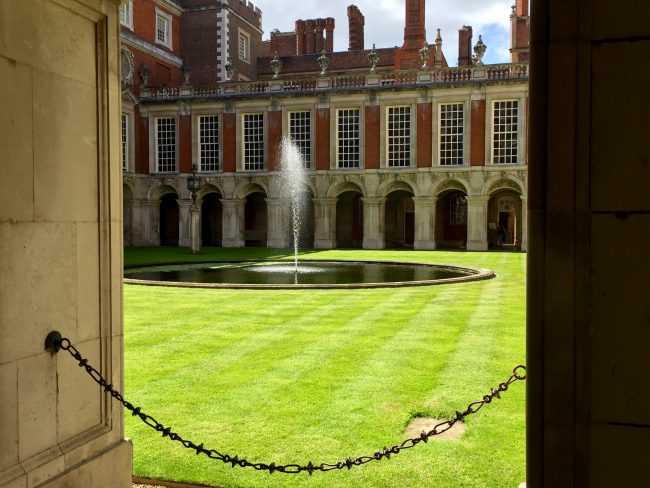 They sometimes hold exhibitions. On one visit a few years ago, we saw The Empress and the Gardener of one of Capability Brown’s draughtsman’s plans for the Russian Empress Catherine and her palace at The Hermitage in St Petersburg. Since I’ve been there, I found it particularly interesting.

Around the quadrangle of the Fountain Court we found somewhere to enjoy a spot of afternoon tea. This was our only disappointment. Whilst the tea and coffee were both very good, our cakes were dry. My Victoria sandwich was over sweet. At £4.25 a slice, I’d expect something of excellent quality.

We did like the shop near here though. In fact, it had so many lovely items, we bought a present for our friend’s wedding. The assistant packed it securely for us and we collected it when ready to leave.

The grounds are well planted with lawns, striking shaped yew trees and colourful bedding displays. The site is suitable for wheelchairs and buggies, although there are some gravel paths. The whole site covers 750 acres.

I liked the bright deckchairs with a character from the Palace on each one. I wished I’d brought my newspaper and been able to sit for a short read. The Long Water, built by Charles 1, stretches as far as the eye can see – three-quarters of a mile into the distance.

There is plenty more to see – we didn’t have time for the famous Maze, the Kitchen Garden or the Great Vine – still producing grapes and planted in 1768. It will have to wait for another day – we had a boat to catch. 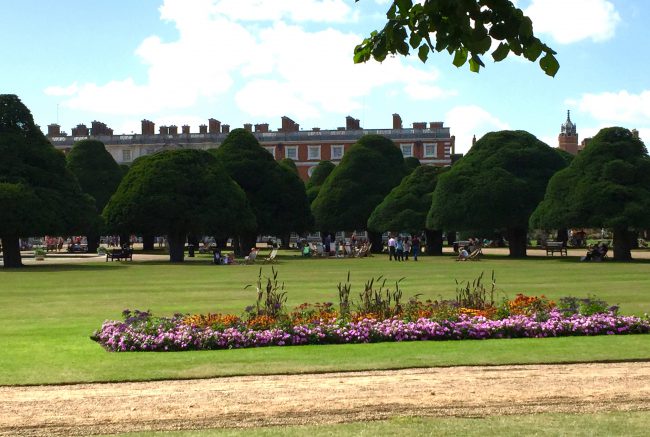 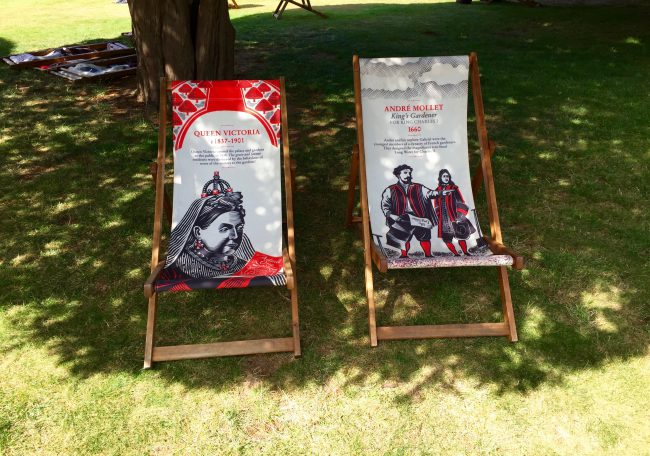 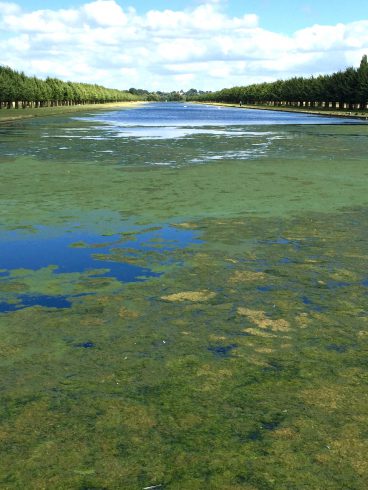 Returning home, the sun was still shining and it enabled us time to reflect on a pretty perfect day. 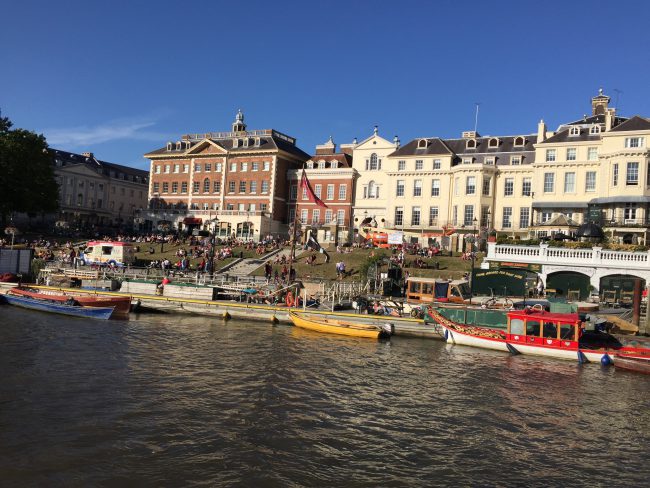 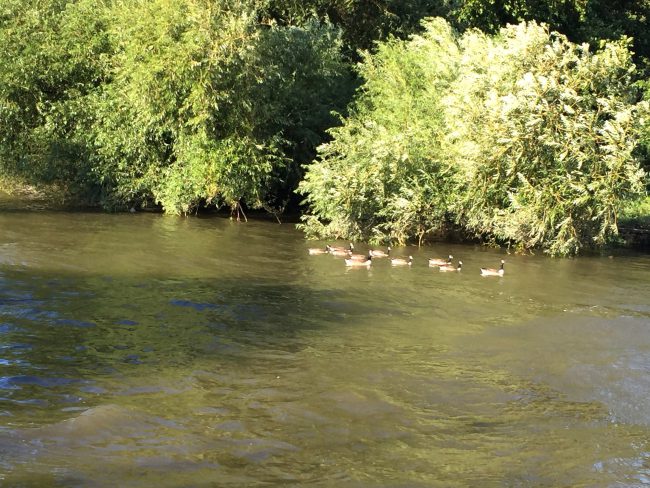 Disclosure:  Turks Launches supplied a complimentary return ticket and Hampton Court Palace allowed free entry to enable me to write this blog post.  All other incidentals paid for.  As usual, views are my honest opinion.  All images copyright of Olivia Greenway unless stated otherwise and may not be used without prior written permission.